In early October, the Spring Branch-based manufacturing and robotics company ARC Specialties made news for donating a $150,000 Kuka welding robot to the Texas State Technical College in Waco. It was just the latest act of generosity from the 33-year-old business, which has also donated equipment to LeTourneau University and Texas A&M. Dan Allford, who founded the company in his Houston garage in 1983, said he feels a special obligation to help keep manufacturing alive in the United States. 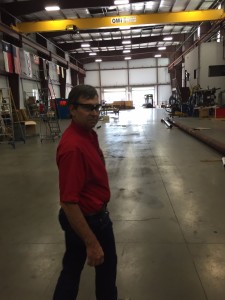 “We’re one of the last manufacturers of large robots in America,” he said during a recent tour of the company’s headquarters on Stebbins Drive. “They’re now being built in Germany, Austria, Sweden, China, and Japan. It’s terrible—we’re systematically destroying our industry in America. And we feel so strongly about it that we donate equipment to schools.”

ARC Specialities has became a world-renowned manufacturer of custom robotics and machinery, having installed its products in 20 countries across every continent except Antarctica. “In the last year we’ve installed robots in Romania, Singapore, Brazil, Mexico, and Canada,” Allford said. “I wouldn’t be working in places like Russia and China if we had other competitors who do what we do. I have friends all over the world.” He showed me a corkboard covered with currency notes from the many countries where he’s done business.

Allford has degrees from the University of Houston and Texas State Technical College, and worked at Baker Hughes before leaving to start his own company. He was a programmer who had always been fascinated with robotics, and thanks to his technical degree at TSTC he was also an expert welder. “There are very few programming geeks who can weld,” he explained. One of his new company’s first contracts was to build and install a hot-tap cone for the smokestack of a plutonium plant in Idaho. “I had to work inside a pipe, so it was a confined space. It was radioactive—it was great,” Allford said with a laugh. “I was 24 at the time, and I remember thinking that if the government knew a 24-year-old had built this part in his garage, they might have reconsidered.”

One of the company’s custom manufacturing robots

Although he grew up in Austin, Allford knew the right place to open a manufacturing business in Texas was Houston, and the right place in Houston was close to the Energy Corridor in Spring Branch. Until recently, ARC Specialties has gotten most of its work from the oil and gas industry. The recent oil slump has compelled them to broaden their client base, however. “The oil crash has encouraged us to diversify, so we’re doing more defense, plastics, aerospace, and space.”

Because America has lost so many manufacturers, ARC Specialties now has to custom-build many of its own tools, like specialized welding equipment, that used to be mass-produced. That’s another reason Allford thinks it’s so important to help American technical colleges stay up to date with the latest technology. “Personally, I believe that the only three sectors of the economy that actually create wealth are manufacturing, mining, and agriculture—everything else just redistributes wealth,” he said. “So I’m proud to be part of one of the segments that produces wealth.”