El Ultimo Tacos (The Name Says It All) 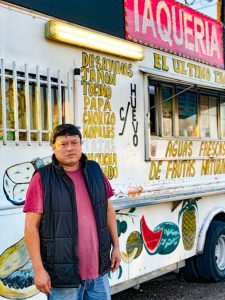 Unexpectedly thrown into the world of tacos, Federico Montano found himself at the wheel and grill of what became Spring Branch’s famous El Ultimo taco truck. “I was never a cook; I was a truck driver. My cousin was a cook. Twelve years ago, he convinced me to start this with him,” says Montano. “Three years after we started, he went back to cooking on Airline Drive, so I had to take over from there, and learn everything,” he explains. “This became a passion for me.”

The phrase “El Ultimo” would normally be an exaggeration, a marketing ploy that falls flat among the hundreds of taco trucks that Houstonians have the option to visit. Normally. But Montano’s taco game prevents El Ultimo from being a normal taco truck.

Corn tortillas, a foundational element of a quality taco, often make or break (literally) the taco-eating experience. This is the first category in which El Ultimo wins. Their pliable tacos are non-splitting, satisfying vehicles for ingredients without overwhelming or distracting from the delicious cargo on board.

But what does this cargo consist of? Your meaty options are extensive, including cuts such as pollo, bistek, chicharron, chorizo, and some that you may or may not need to Google Translate; like capechanos, lengua, pierna, milanesa, orejas, cabeza, and tripa. That level of variety on hand is not the norm for taco trucks around Houston.

“It’s expensive. Sometimes meat is $5 per pound, and a lot of cooks don’t want to spend that kind of money. I do, because that’s the way we started the truck. We started by giving good quality, so I have to keep it. I have good customers that demand good quality. I’ve made my name this way, and I have to keep it,” says Montano.

Lengua, or cow tongue, is a tender, beef-flavored taco-stuffer that isn’t a fraction as intimidating as it sounds. Montano purchases lengua even when it’s $6 per pound, to keep true to his rarely changing menu. After all, the menu is painted onto the side of the truck.

What customers are asking for most commonly, it turns out, is fajita (carne asada), barbacoa, and pastor meats. “I have a lot of customers from the Memorial area, and that’s what they prefer,” says Montano.

Why choose just one? Tacos are meant to be eaten in multiples. Try the barbacoa for your melt-in-your-mouth fatty taco, the chorizo for the seasoned and salty taco, and the lengua for your wildcard-but-won’t-regret taco. Any way you order, you won’t go wrong.

Avocado, grilled onions, cilantro, and queso fresco fill the remaining space without overflowing with each bite, avoiding the taco salad situation requiring a fork and a clean-up crew.

“We took the recipes, and the way we prepare, from Mexico,” explains Montano. The inspiration for the style of tacos Montano creates came from a certain taco stand in Matamoros, Mexico. “My cousin worked there for a few months before coming here. They put cilantro, onion, cheese, and avocado on their tacos. We just really liked that style.” 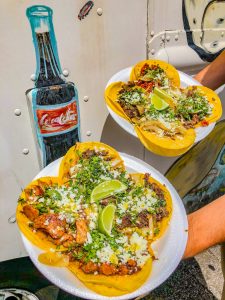 But before you go thinking that this Matamoros truck must be even better than its Houstonian successor, Montano remarks that his decision to use quality meats at El Ultimo has improved the flavor from the original. “The quality of the product is different. I use good quality meat. We buy it, fix it, season it, and cook it with charcoal in the truck.”

Once you’ve fallen in love with El Ultimo, you might just want to take the truck home with you. And you can, because they cater! “We serve groups of about 30 or more people for catering, at private homes, companies, schools, and churches. We’ll go anywhere. Even Conroe, Rosenberg, or anywhere for 100 miles around,” says Montano.

“When we started, the rent was cheap in Spring Branch. But this neighborhood is getting hot now, so the rents are starting to get high. There’s a guy I’ve known for years, and he told me, ‘I’ve got a place for you,’ and he’s kept it at the original low price,” says Montano. Thanks to this friendly landlord, we can still find El Ultimo at Long Point between Wirt and Antoine, every day of the week.

“Yes, all kinds of new people come every day. But my customers have been steady over the years. I keep my customers. And I’m happy with that.”