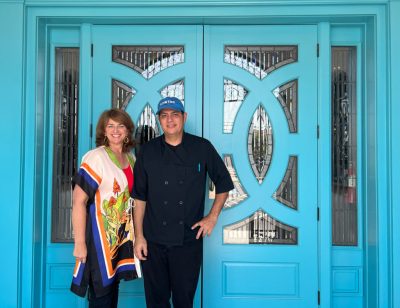 The former site of a Spring Branch District taqueria has been transformed into a family-friendly seafood restaurant by a well-known restaurateur whose concepts are anchored in the past, with an eye on the future.

Alli Jarrett, owner of Harold’s in the Houston Heights eatery and the Texas Restaurant Association’s 2022 Outstanding Restaurateur of the Year, opened Low Tide Kitchen & Bar in August at 2030A Bingle Rd. in the Spring Branch Management District.

“Some of my fondest memories as a child were “creeking” in the inlet and playing on the beach at Pawleys Island, S.C., as the tide was going out,”  Jarrett said, explaining the meaning behind the name of the new Spring Branch restaurant.

Jarrett opened Harold’s about nine years ago in a 95-year-old building that formerly housed Harold’s in the Heights, an iconic clothing store owned and operated by Harold and Milton Wiesenthal.

“People often ask me if I am related to Harold, as in the clothier. My response is, ‘I’ve been keeping his name alive,’ ” she said. “We renovated the building in 2012-2013 and kept the name to pay homage to history.” 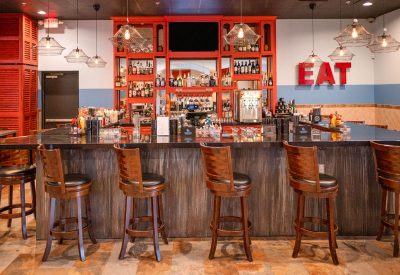 Just as Harold’s has a history, so does Low Tide. Jarrett first brought the concept to downtown’s Finn Hall food court, 712 Main St.

“We were one of the original operators in December 2018  and we were open until the pandemic shut down everything downtown in March 2020,” Jarrett said. “We have a few of the same menu items in Spring Branch and, like (at) Finn Hall, we have fresh ingredients with a scratch kitchen.”

By moving Low Tide from a food hall to a free-standing building, Jarrett said, “we’re able to have a more robust menu that includes brunch and now we have a mixed beverage permit with a full bar.”

Most of the downtown business was lunch service with special events in the evenings, and in Spring Branch “our location lends itself to not only the business lunch guest but also more families dining out and celebrating occasions.”

Southern hospitality and fresh ingredients are what make Low Tide and Harold’s similar, Jarrett said, and the new menu includes adaptations from Harold’s such as chicken-fried chicken and mash, called “Sister’s Fried Chicken” at Low Tide. 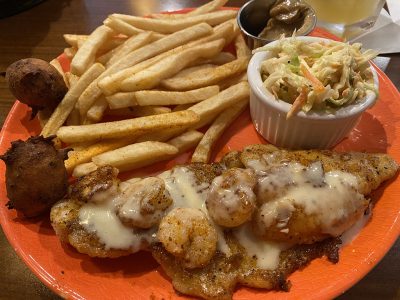 “Growing up catching and eating fish, crab and shrimp was a part of life and creating this menu with fun simple dishes, using fresh ingredients, was a joy,” she said.

While Low Tide is a “seafood-forward restaurant,” Jarrett said the menu can accommodate many palates with burgers, salads and chicken.

Jarrett said many guests have come to Harold’s from Spring Branch. She saw a need for more restaurants in the community, not only as places for people to eat and make memories but also to create jobs.

“I’m bullish on the neighborhood and, like we did in The Heights with Harold’s, I want Low Tide to be a part of a growing Spring Branch community and become a part of its fabric,” she said.

Low Tide is open seven days a week. Brunch is served on weekends. Kids eat free on Tuesdays. The restaurant is available for private parties and catering.