Fire Up The Grill and Chill at Korea Garden 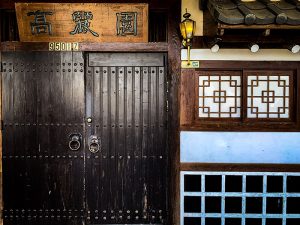 In the heart of Spring Branch District’s Koreatown sits Korea Garden, noticeable from the road by its distinctive Asian, stylized façade. A tiled roof, typical of Korean architecture, provides shade for visitors walking past painted walls and decorative wooden window frames. To the casual observer, the three characters painted on a wooden plaque above the entrance may be assumed to be Korean. However, in an interesting historical twist, the characters are Chinese, and their translation reads “Korea Garden.” Before the Korean alphabet was invented in the 1400’s, Koreans used Chinese characters to express their language in writing. Remnants of this cultural mix can still be seen in Korea today, if you take a close enough look.

Hoisting open the heavy wooden doors begins your participatory dining experience in one of Spring Branch’s oldest Korean restaurants. Wooden beams, tiled roof overhangs, and plants growing down the middle of the restaurant evoke the Asian “garden” theme that the name implies. Since planting its roots here in 1983, Korea Garden has become known for its Korean BBQ experience, in which you are encouraged to take an active role in the cooking process.

Ordering one of the BBQ meats entrees, such as the marinated pork belly, Spicy Sam-Gyup-Sal, or the classic thinly sliced, marinated Bulgogi (“fire + meat”) rib-eye, is your best course of action – with or without the extra order of shrimp, scallops, cheesy corn, or steamed eggs. Squid, shrimp, mussels, calamari, and scallops await those looking for swimmingly tasty seafood. Stews, hotpots, a variety of appetizers, Korean pancakes, and rice dishes will be sure to cover any gaps in your Korean food cravings.

Although the idea of properly cooking unfamiliar food can be intimidating, the servers quickly set you up for success. After turning on the charcoal grill installed in your table, you are soon presented with an array of banchan, side dishes that seem to just keep coming until your tabletop is transformed into a buffet. These banchan plates contain everything from kimchi, cucumber kimchi, potatoes, seaweed, to fish cakes. Make sure to give each one a try; you might be surprised at which ones spark the interest of your taste buds.

Our table managed to support the weight of an additional lunch order, the Galbi, a cafeteria-style tray containing thinly sliced grilled beef, banchan, tempura veggies and rice. Shortly thereafter we realized the Sam-Gyup-Sal BBQ was enough for two on its own, but there was no going back. Plus, we’d already devoured the beef at that point. After second-guessing our ability to adequately cook the raw pork on the grill, we resorted to asking our server for the correct technique. A couple times, another staff member came by, picked up our tongs, flipping over our sizzling pork strips and fixing our newbie mistakes. 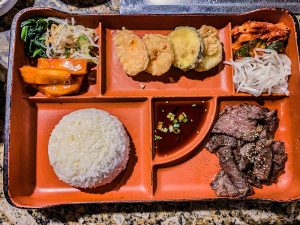 Arriving hungry, and bringing company are prerequisites for getting the full experience at Spring Branch’s Korea Garden. Don’t worry, all stomachs in your party will be satisfyingly filled by the time you get to the green tea ice cream. This undertaking is meant to be shared and cooked with friends, filling your booth with laughter, a sweet smoky aroma, and a new (or renewed) dining experience. As they say in Korea, “mashittge deuseyo” – enjoy your meal!