Kyle Pierson had a problem. The restaurant industry veteran and bar manager at Montrose favorite Hay Merchant, couldn’t find a craft beer bar near where he lived in Spring Branch. “At Hay Merchant, we would get so many people from Spring Branch, from the Energy Corridor, from Katy,” Pierson said. “They were driving all the way to Montrose because outside of 610 there’s just not much in terms of craft beer.”

Fortunately, Pierson, a bartender with seventeen years of experience, was in a position to do something about that. He and his wife Amanda Mixon, another industry veteran, had long wanted to open their own bar. “My wife was actually the one to say, ‘You’re always complaining that there are no cool bars outside the loop. You’re qualified to open one. Why don’t you do it?’ And I was like, you know what? I am qualified.”

Thus, the idea for The Branch was born. The American craft beer bar is expected to open later this month on Long Point, in the building that formerly housed the restaurant Otilia’s. Pierson will be in charge of the beverage program, Mixon will oversee the back-of-the-house operations, and Mexican-born chef Madeline Cabezut will design the menu, which Pierson describes as “bar food with a strong Mexican influence.” 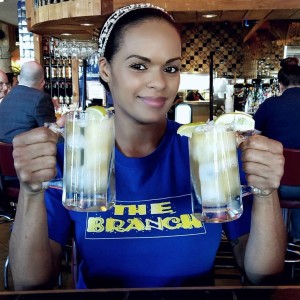 Another one of Pierson’s problems in Spring Branch was the difficulty of getting late-night food, so The Branch kitchen will serve until 11. “I hope all the people that work in restaurants that close at 10 will come by and eat here, have a beer, and watch some sports.”

Pierson said he expects the bar’s busiest times to be weekday happy hours and weekend brunch, so the bar will provide table service to patrons during those hours. The rest of the time, it will offer counter service. A spacious patio will allow patrons to enjoy their brews outside.

Pierson plans to dedicate 10 taps to easy-drinking craft beers, such as St. Arnold Lawnmower and Eighth Wonder Dome Faux’m. “Those are for the Budweiser drinkers, the Coors drinkers—these beers will help introduce them to craft beers,” he explained. Another 10 taps will be aimed at “hardcore beer nerds that want the freaky stuff, the high ABV, the double IPAs, the quadruple IPAs.” The remaining six taps will be geared towards Pierson’s own tastes, which run towards Belgian and sour beers. “Those are the ones that I kind of hope people don’t buy, because then I’ll have to drink them myself,” he joked.

For Pierson, who grew up in Spring Branch and attended Northbrook High School, the sweetest part of opening The Branch will be bringing his expertise in craft beer to his old stomping ground: “The reason I chose Spring Branch is that this is where I’m from. This is my ‘hood.”