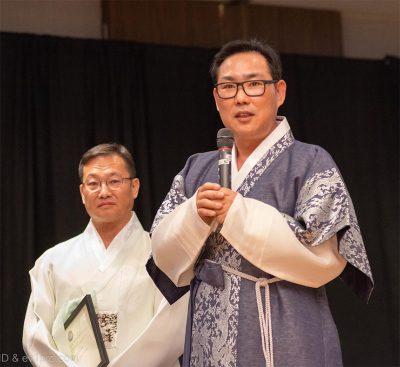 Kang at his induction

He is bringing his considerable business acumen and involvement in the Asian American community to his new role as the chamber’s president and chairman.

Emblematic of his vision for the KACC, Kang set his sights on a big installation gala—and that’s just what he got. On Feb. 19, around 300 guests—including U.S. Rep. Al Green, State Sen. John Whitmire and Council Member Amy Peck—gathered at the Sheraton Houston Brookhollow Hotel for ceremonies, speeches and networking.

Kang moved to The Woodlands in 1998. His first forays into business included owning slew of picture frame shops throughout the Houston area. After a decade, Kang became a real estate broker and owned two fast-food restaurants.

“I’ve always done business,” Kang said. “I know what to do in business, and I know what kind of things that business owners go through.”

Kang said he has been in the news here before for serving the local Asian community at large, once collecting $5,000 for a Korean family, and $50,000 to renovate a Chinese woman’s flooded home, after Hurricane Harvey disrupted their lives.

But prior to his involvement with the KACC, he had not focused his efforts on the Korean-born community, whose population is estimated by the U.S. Census to be around 14,000 in Harris County. Kang ups the estimate to anywhere between 25,000 to 35,000 in the greater Houston area.

The region’s largest concentration of people from Korea is in the area recognized as Koreatown, generally along Long Point Road in the heart of the Spring Branch Management District. The road is lined with Korean restaurants — BORI being the most upscale one — a Korean newspaper office, Korean language schools and professionals’ office bearing Korean names.

According to Kang, a Korean grocery store in the early 1970s started the influx of Korean businesses and people to the area, which was home to fewer than 500 Koreans in 1976.

The KACC was established back in 1973 to advocate for the rights and interests of Korean businessmen and women.

“The chamber’s mission is to help Korean businessmen and women that have started a business or want to start a business,” Kang explained. “We’re there to help with the process… [from assisting them in obtaining] loans with a lender, materials, or equipment. [We] use our network education program to increase buying power.”

Initially approached by community leaders to head the Korean American Association of Houston, Kang decided the chamber of commerce position would be a better fit based on his experience and expertise.

According to Kang, the largest number of Korean-owned local businesses work in beauty supply, with between 200 to 300 stores in the greater Houston area. When the pandemic started, the stores locked down, allowing for pick-up only.

“That was the biggest challenge among Korean businesses other than restaurants [having] to be locked down as to-go only,” Kang said.

“There were no members when I started, and the organization couldn’t do anything because when there’s no members, there’s no support,” Kang said.

Since January, however, Kang has collected over 100 memberships and set a goal of 200 active paid members by the end of 2024. With a larger group of paid members, Kang touted benefits to businesses such as gathering KACC sponsorships and pooling their power to buy goods. 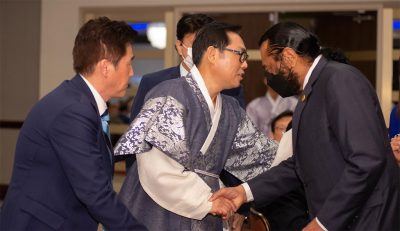 More trade opportunities between South Korea and Houston may be in the near future following Houston’s recent designation of the Korean port city of Ulsan as its newest sister city.

“For Koreans who don’t speak good English, it is not easy to obtain those certificates,” Kang noted. “You can probably do it online for $99, but sometimes [business owners] pay $250 or $500 to sit in a class with a Korean translator.”

Citing several high-profile Korean corporations with a presence in Houston, like Samsung, LG and SK Group, Kang also imagines an annual golf tournament for businessmen and women and an accompanying job or internship fair for their children.

To Koreans involved in businesses small or large, Kang highly encourages connecting with the KACC.

“If anyone wants to do any kind of business or collaborate, reach out to me,” Kang said. “I’m [also] a board member [for the Spring Branch District], so you can come to (our) board meetings or call me directly.” His real estate office number is 713-465-1477.