Military service forges friendships that last a lifetime, and local veterans have gathered for more than 60 years at Veterans of Foreign Wars Post 8790 at 1560 Foley St. in the Spring Branch Management District.

More precisely, Post 8790 is celebrating 67 years in the community. An anniversary celebration is planned for Saturday, May 28, where you will likely spot a certain VFW auxiliary president smiling from ear to ear.

For the last 18 months, Alexander has made it her mission to have the street in front of Post 8790 renamed in honor the veterans who gather there.

The City of Houston has finally approved the name change and the new street signage will be unveiled at the celebration this weekend.

The 1500 block of Foley will now be “Veterans of Foreign Wars Way.” The street sign will also feature the Spring Branch District logo and tagline: “The Heart of Houston.”

An avid community volunteer, Alexander has been the president of the Spring Branch Central Super Neighborhood since the early 2000s, which is what led to her involvement with the Post.

Alexander, from Pittsburgh, moved to Houston in 1973 and, after working in oil and gas, as a legal secretary and then legal assistant, she started a party planning business.

In 2005, the Super Neighborhoods in Spring Branch hosted a “Salute to Our Troops Parade,” she said, and through this activity she became involved with VFW Post 8790, where she has chaired committees and fundraisers and is the president of the auxiliary chapter.

The national VFW Auxiliary started with a group of women who wanted to serve veterans. Today there are more than 475,000 male and female members and more than 3,500 auxiliaries representing all 50 states. At Post 8790, there are about 220 members of the auxiliary, about 40 of whom are men, Alexander said. About 600 veterans of foreign wars are members of the post.

“We are also about families,” she added. The VFW exists to support veterans but also the community, she said. Post 8790 participates in community events and parades, sponsors scholarships for students and much more.

“We are not what they think we are. I think people think it’s a place where a bunch of old fogeys get together and smoke and drink,” Alexander said.

A BBQ lunch is planned for the renaming. Houston Mayor Sylvester Turner is scheduled to join the ceremonies.

“It’s open for everyone to come celebrate and see what we are about,” Alexander said.

The post hosts regular steak nights and hamburger and hot dog nights that are open to the public. If you are looking for a safe and clean place to host your next gathering, Post 8790 has two rooms available for rental, one of which can hold 500+ people. Not to be overlooked is the post’s bingo hall facing Long Point Road.

Post 8790 is the first VFW post in the city of Houston to secure a new street name.

“It’s going to be easier to find where we are. The other posts in the city want to know how I did it,” Alexander said. “It’s tricky.”

Alexander spearheaded an effort to update the furniture at Post 8790, which was long overdue for a makeover. She is anxious for the public to come by and see it.

“Considering it took me 18 months to get this done and two years to get the furniture, I’m going to have a nice summer because my work’s over with for while,” she said. 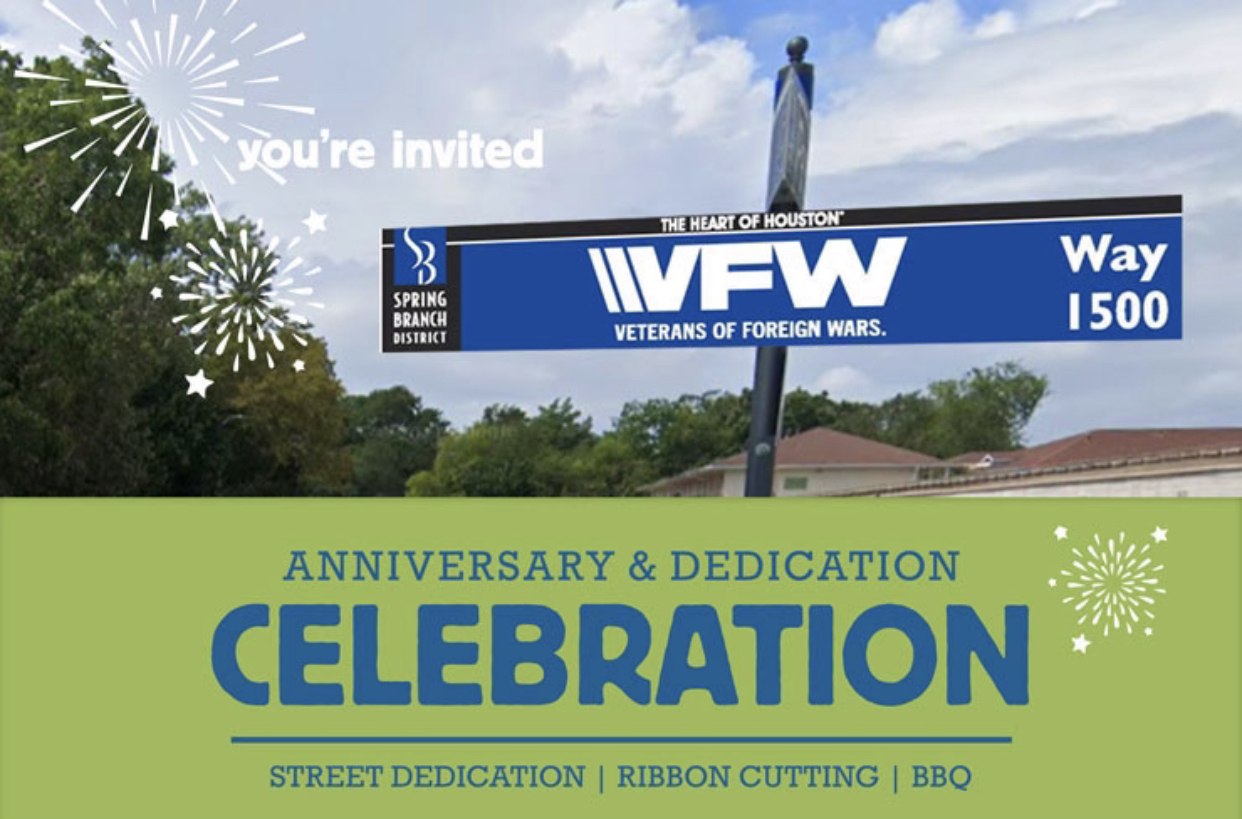 Saturday, May 28
Anniversary Celebration and Dedication
11 a.m. to 3 p.m. including a BBQ lunch
Dedication at noon