Two years ago, restaurateur Terry Stamatakos and his wife moved from New York City to Houston to be closer to his wife’s family. He figured he would open a pizzeria here, as he had in New York. After looking around, he decided that Houston already had enough pizza joints, but what it didn’t have, he soon discovered, was a great Greek restaurant. “To be honest, I couldn’t find any good Greek food here,” Stamatakos said.

Terry Stamatakos at the restaurant

To test the Houston market, Stamatakos decided to start a food truck. Based in Spring Branch, the truck traveled around the city, quickly acquiring a reputation among local foodies for its authentic gyros, falafel, and souvlaki platters. Within six months, the truck was besieged with customers at every stop, and Stamatakos was catering events as large as a 200-person wedding.

Devoted customers kept encouraging him to open a brick-and-mortar restaurant. “People really liked us, they liked our food,” Stamatakos said, with obvious pride. “If it wasn’t for that, I would have kept the food truck. Because that was fun for me, traveling around town.”

Last October, Stamatakos gave up the truck in favor of a modest space in a strip center at the corner of Blalock and Campbell, which he decorated with photographs of sun-drenched Greek islands and fishing nets hanging from the wall. Although he was born in New York, Stamatakos grew up in Athens watching his mother and grandmother cook traditional Greek dishes. Having already learned the basics from them, he returned to New York in his 20s and enrolled at the Culinary Academy of Long Island. 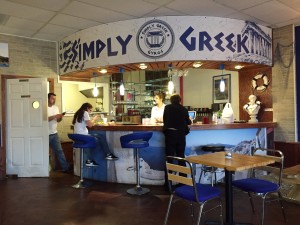 After years of dividing his time between Greece and the U.S., Stamatakos and his wife moved to New York full-time about a decade ago, deciding—correctly, as it turned out—that the ailing Greek economy wouldn’t improve anytime soon. Although he enjoyed New York, Stamatakos now says he prefers Houston. “I love the people—everyone is so nice here,” he said. “In New York, everybody’s in a rush. Here they will stop and talk to you. Yes, it’s hot, but that’s better than snow.”

Simply Greek has proved to be every bit as popular as a brick-and-mortar restaurant as it was a food truck, even without advertising. On Friday and Saturday nights they host belly dancing, accompanied on Saturday by a live band; Stamatakos showed me a cell phone video of a raucous crowd packing the restaurant to hear music on a recent Saturday night. When asked why he thinks he’s been so successful, Stamatakos credits his strong work ethic (he estimates that he works 80 hours a week) and love of cooking:

“My wife and I are hands-on owners,” he said. “We’re here every day, and we take care of the customers. And we love what we do. If you don’t love what you do, if you’re just doing it for the money, you’re going to get burned out. But this is our passion.”