Across multiple languages, “Cheers!” — most often said before imbibing in alcoholic drinks — translates to something related to your health. Unfortunately, partaking of even a little alcohol can wreak havoc on your body.

A Spring Branch Management District-based company is seeking to remedy the problem.

Cheers is the brainchild of Houston area native Brooks Powell, who says his products mitigate the negative effects of alcohol by reducing short-term alcohol withdrawal, replacing lost vitamins, and providing your liver with what it needs to break down alcohol and its toxic by-products.

If this concept sounds familiar, that’s because Cheers, based at The Cannon co-working campus in the Spring Branch District, used to be Thrive+ Health Inc. and was featured on ABC’s “Shark Tank” in 2018.

While the sharks didn’t bite, that didn’t deter Brooks, who started Thrive+ upon reading the first major research publication on DHM, the main molecule in their product, which came out in 2012 while he was a sophomore at Princeton University

With the help of a neuroscience professor, a Princeton alumnus who specializes in chemical patent law, and a pharmaceutical manufacturer, Brooks started the primary company in the United States commercializing DHM for human consumption.

“Since our Shark Tank appearance, we’ve been busy transitioning from Thrive+ to Cheers, and unveiling a new brand along with the name change,” Brooks said.

“Every startup has a moment of realization where their mission and vision become clear as day,” Powell said. “We realized that our strengths and passions lied in creating products designed to make alcohol consumption a healthier, happier and better experience. This realization resulted in rebuilding a brand that represented our newly formed mission and vision.” 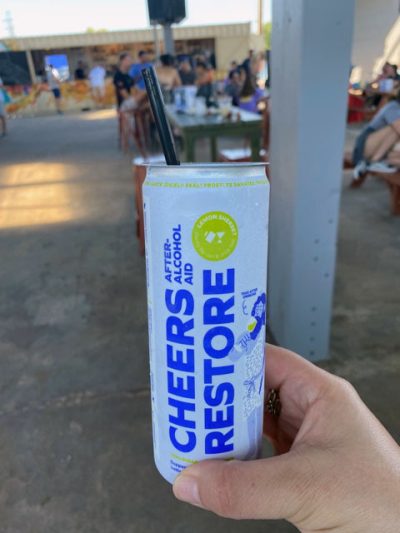 Also, he said, “Cheers” is easy to spell and has good connotations.

Cheers customers are people who like to enjoy alcohol but are looking for a way to do it in a healthier way.

The rebranding has been followed by additional products in the line. Thrive+ is now Cheers Restore after-alcohol aid. If you only take one product, it should be Cheers Restore, Powell said, which are capsules taken after consuming alcohol to support your liver and help you feel great the day after drinking.

The science behind it is complex but basically, to metabolize alcohol, your body must first convert alcohol into acetaldehyde, which is 20 times more toxic than alcohol. Unfortunately, your body can only process on average up to one drink’s worth of acetaldehyde per hour. Cheers Restore reduces the amount and time you’re exposed to acetaldehyde, Powell said.

Cheers Hydrate, another product in the line, is a powder mix designed for rapid, effective and safe rehydration to support overall health and immunity. “It’s the Robin to the Batman” of Cheers Restore, Powell said.

Recently, the bar located on The Cannon campus — Powder Keg — featured a margarita featuring the new beverage version of Cheers Restore. The 12-ounce can of lightly carbonated lemon sherbet-flavored beverage sweetened with stevia (and zero sugar) contains electrolytes and B-vitamins (and of course DHM) and mixes well with alcohol.

Brooks also just unveiled a new brand of hydration products — Lightspeed, a 15-stick pack of their NASA-based hydration powder. “It’s basically Pedialyte on steroids,” Powell said, and is based on a recently expired NASA patent.

From a month-to-month rental of four seats at The Cannon to a large dedicated space as part of a two-year lease, Powell said his company has been served well by The Cannon for the last several years. The Powder Keg has also served as a great testing ground, he said.

The cheapest and easiest way to purchase Cheers products is through the company’s website. As their warehouse is local, many products are delivered in one day by USPS to the Houston area.

The fastest delivery can be found via the Gopuff delivery platform, Powell said, sometimes in minutes depending on your location in Spring Branch.

Customers have been asking for retail sites where they can get Cheers, he said, so he is planning to roll out the product in local bars and, he hopes, at retail outlets such as liquor and grocery stores.

A recent demo at the Kuhl-Linscomb generated $1,400 worth of sales in three hours, he said.

“There are a lot of people who want to be healthier, but they don’t want to full-stop quit alcohol,” he said. “That’s where Cheers comes in.”