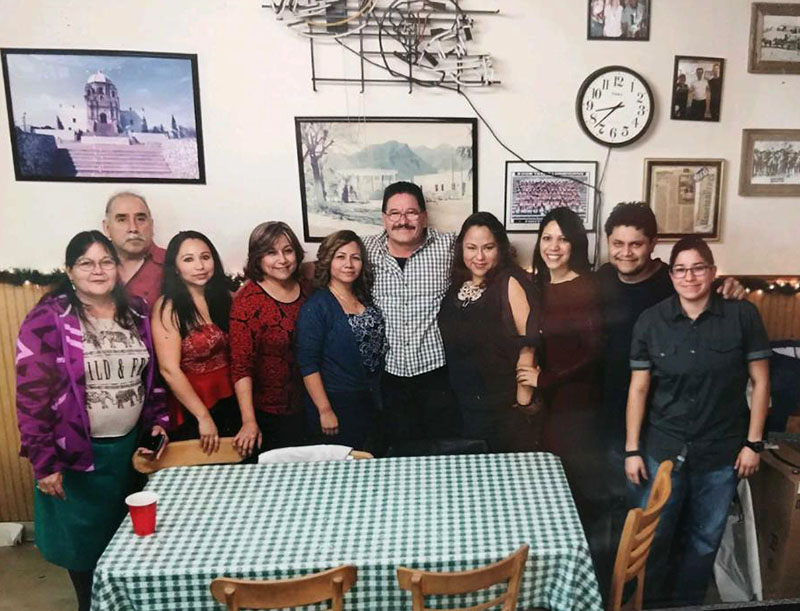 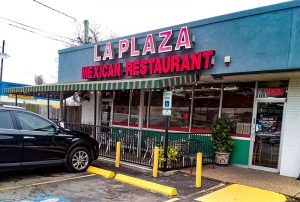 “If you were to visit La Plaza for the first time, you’d be expecting a Mexican-themed restaurant, but when you walk in here, it’s not that at all,” laughs Elizabeth Villarreal, daughter of La Plaza owner Valdemar Villarreal. Eating here takes you back in time to Spring Branch of the 1960’s, in the structural style of the restaurant as well as their particular take on Tex-Mex.

“The shopping center is essentially the same as it was 50 years ago,” explains Elizabeth. Since the 1950’s, when what we know as La Plaza was Magic Chef Coffee Shop, the restaurant has offered customers a diner-style experience. Bar stool seating faces the open kitchen, where food is prepared in front of hungry patrons.

When Elizabeth’s grandfather, Roberto Villarreal, bought and renamed the restaurant to La Plaza in the 60’s, the fare changed from coffee and sandwiches to Tex-Mex. “What it was, and it hasn’t changed much today, is an American diner, typical of the 50’s and 60’s,” says Valdemar.

As was common in 50’s diners, the restaurant was once open 24/7, and served breakfast at all hours of the day and night. Although they have since changed their hours to 6:30AM-10:00PM everyday except Sunday, which is 8:00AM-2:00PM, La Plaza will still cook you waffles or migas anytime you crave them. 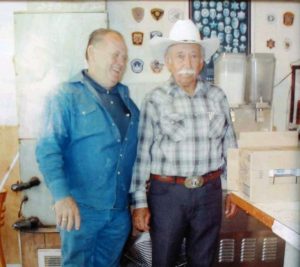 “The word Tex-Mex, I embrace it,” states Valdemar, as he mentions that his most popular dishes are the enchiladas and carne guisada, two iconic south Texas favorites. “Anything we’ve got on the menu, we make it all ourselves. All good, home-cooked food,” he affirms.

Tex-Mex in the 50’s and 60’s had not yet become the Houston institution that it is today. Houston’s first Tex-Mex restaurant opened its doors in 1907, but few restaurants caught on until Ninfa’s introduced the fajita to Houston menus in the mid-70’s. Although Tex-Mex has changed over the years, and La Plaza has added items such as fajitas over time to reflect current tastes, their menu has many dishes original to its early days. That’s why, as Valdemar notes, “The flavor’s different here; it’s not the same as everywhere else.”

The menu was assembled as founder Roberto Villarreal integrated his roots from Nuevo Leon, Mexico, with the tastes of his Spring Branch customers. Moving from dish-washer to owner, Roberto established a restaurant and a family legacy. His son Valdemar took over La Plaza 30 years ago, and has maintained the family atmosphere that has been turning neighbors into regulars for decades. “La Plaza was always the meeting ground when it comes to our family gatherings,” says Elizabeth.

Family bonds have formed over the years among the staff at La Plaza as well. Elizabeth maintains, “Most of the staff here are basically family now; and we don’t have a high turnover rate.” Building these relationships has allowed for a greater sense of community, and mutual support within the restaurant, especially in the face of challenges associated with running a small business. “It can be pretty difficult. Until we got older, we didn’t really understand how much work my dad was putting into the restaurant. If something breaks, or somebody can’t come in, one of us has to show up.”

Despite the everyday challenges of running a small business, Valdemar reflects that the greatest experience through the years has been interacting with customers. “We’ve got some customers whose parents used to bring them here as kids, and now they bring their own kids. My customers tell me, ‘It’s been fun seeing your kids grow,’ and I’ve enjoyed seeing their families grow as well.”

Next time you grab lunch, you might see Elizabeth, Valdemar, or his sister, Maria, keeping coffee cups and customers full at La Plaza. When Elizabeth isn’t helping manage the daily business of the restaurant, she is working on her degree in Criminal Justice. “Growing up, there were always HPD cops eating at our restaurant, and I think I wanted to be like them,” she says. 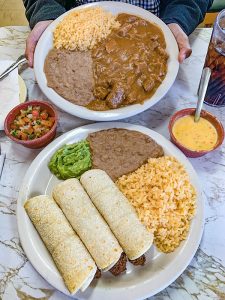 As for the restaurant, the Villarreal family is sure that it will remain in the family in generations to come. “We don’t try to compete with anybody, we are who we are.” Elizabeth and Valdemar expressed great appreciation for the Spring Branch community that has sustained them for so many years. “Thanks so much to Spring Branch, and Houston. It’s a good community and good people,” Valdemar reiterates. “Oh and — come try my enchiladas!”