Squeezed into a retro, blue and white strip mall at the corner of Long Point and Blalock is one of Spring Branch’s few sources of boba tea: Tila’s Teahouse. With advertisements on the windows in both English and Spanish, boldly displaying their offerings of “Milk Tea Tapioca” or “Te Con Leche y Tapioca,” Tila’s Teahouse has situated itself in an area of town more typically associated with Korean cuisine than Taiwanese. But with the rise in popularity of these Taiwanese-style drinks, especially within highly international cities such as Houston, the number of boba shops around the Bayou City has grown exponentially in the past few years, and are beginning to find their way into Spring Branch.

Stopping by Tila’s means being presented with a variety of cold and sweet teas, slushies, and smoothies. This small shop emphasizes fruit flavors across the board, with their mango tea, kiwi slush, or coconut smoothie. Pineapple, strawberry, and peach flavors are abundant throughout their drink selection, though more unique flavors such as cantaloupe, avocado, or taro are available as well. And, of course, there’s the boba.

Whether you call it “tapioca” due to its ingredients, or “boba,” its Chinese slang term, or “bubble tea,” which refers to bubbles formed when you shake the cup, the server at Tila’s will know what you are requesting: the ever popular gummy, black balls formed from cassava starch, brown sugar and sweet potato. Some may prefer to add cubed jellies— usually strawberry, mango, coconut, or other fruit flavors. It may sound strange, but it has become a part of life for millions of people around the world. 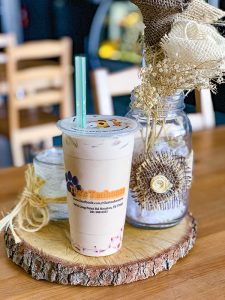 Why would bubble tea drinkers the world over want to have tapioca balls, or jellies at the bottom of a drink? Many bubble tea aficionados claim that it adds texture and variety to their drink, balancing out a sweet silky tea with something fun to chew on. There is also something to be said for the extra photogenic boost that bold toppings and ingredients add to the drinks, helping attract interested customers in a world flooded with tea shops.

At Tila’s, you do not have to just rely on boba for a little variety; you can order from a short list of snacks as well. Vietnamese grilled sandwiches (chicken, pork, or beef), egg rolls, French fries, and onion rings can give you a little substance to pair with every sugary sip you take. And yes, these drinks are sugary. Understandably so, as some claim that the origins of this style of sweet tea lies in the tastes of Taiwanese children, who went head-over-heels for a sweet milk tea stand near their elementary school.

Although the true origins of both sweet milk tea and boba are not entirely clear, we can thank Taiwan for starting this worldwide phenomenon in the 1980’s. A boba tea shop in Taichung City, called Chun Shui Tang and started by Lin Hsiu Hui, is widely recognized as being the first shop to sink tapioca balls into cold milk tea. From there, the phenomenon expanded rapidly in Asia, and from there outward, making its way into the United States.

With Houston home to over 72,000 Chinese residents (according to the 2013 census), and many more thousands of Houstonians from all over Asia, it comes as no surprise that our city would be gifted with more than a fair share of tea shops.

With boba tea shops such as Tila’s starting to pop up around Spring Branch, residents now have quick and tasty options right around the corner when their tea craving sets in. For first timers, try out the traditional milk tea for comparison against the more creative fruit flavors. What better way to beat the summer heat in Houston than with a refreshingly cold, sweet tea?