The Hands That Cook Delicious BBQ 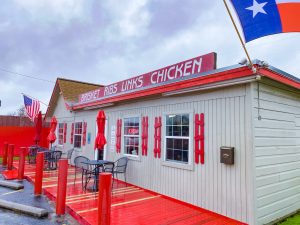 Before the businesses and townhouses began springing up in Spring Branch, when people still raised chickens, pigs, and horses on Gessner, Jessie Handsborough built Virgie’s Place in the Carverdale neighborhood. Jessie named his family’s new hamburger shop after his wife Virgie in 1965, the year that their son Adrian was born, and only eight years after Spring Branch was officially incorporated into the city of Houston.

After about 5 years of cooking burgers, Jessie and Virgie transformed Virgie’s Place into a convenience store named Handsborough Grocery, the only convenience store in the area at the time. “My mom ran this store for 33 years,” says Adrian. Taking the daytime shift, Adrian’s mother would switch duties with his father in the afternoon, who would take over until closing. 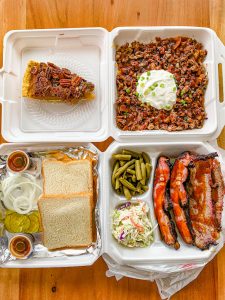 “I grew up here. I would sit in one of these tables and do my homework. I stayed and worked here in the grocery until I was about 27 years old. I was the employee,” says Adrian. From his years of interacting with customers in the family business, he recalls a vivid memory that came to shape his future decisions. “One day I saw an older man come in and talk with my dad. He said that his family business had been sold. When he said that, he broke into tears. That image stuck with me.”

In the 90’s, when Jessie became sick, Virgie made the decision to close their store in order to take care of him. By this time, Adrian was working in the truck-driving business. Before Jessie passed away in 1998, he called Adrian and told him, “take this place and do something with it.” This was a wish that Adrian knew he wanted to fulfill. “He didn’t want to see this property close. He wanted us to keep it in the family,” Adrian says.

Soon after, “I came back off the road and got married. I tried to revitalize the grocery. But other stores were selling gasoline, and we couldn’t compete. I lasted about 2 years. It was tough. I had to close it.” But the story of Virgie’s was far from over. Adrian was determined to find a way to keep the shop running. “I decided to rent out space inside the building to a hairstylist. It kept life in the building while I was driving the truck. It paid the taxes.” 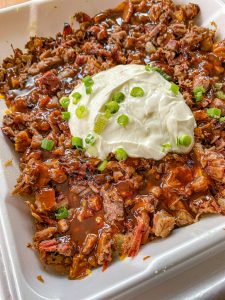 After a few years of housing the salon inside the building, Adrian started selling “take-out only” BBQ in another portion of the building, in a style of cooking taught by Virgie herself. “We had no chairs or tables; people had to walk around the salon to pick up their orders,” he remembers. Eventually the BBQ business grew enough from this original pit to transform the whole building into what is now Virgie’s Bar-B-Que.

Adrian remodeled and repurposed the building to accommodate a BBQ pit, dining space, and the necessities of a full-fledged Texas BBQ restaurant. A fire in the middle of the night also did its best to remodel the building, a setback which Adrian and his wife, as resilient small business owners, were forced to overcome. Despite the struggles over the past 15 years of business, the couple has persisted in serving quality meals to the community that shaped this business and family. And Virgie? “She’s 90 years old, and still driving,” Adrian laughs.

As a first-time customer at Virgie’s, I tried the seasoned pork ribs, which Adrian highly recommended, and were packed with flavor. I accompanied my ribs with more meat, in the form of smoky, lean but tender brisket. Playing the role of the vegetable in my meal was a whole plate full of baked potato, smothered in melted cheese, a generous layer of chopped beef, BBQ sauce, a plop of sour cream, and chives. Pure bliss. 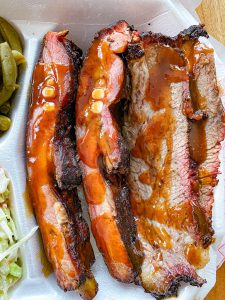 As Spring Branch has changed over the years, Adrian has responded to the changing tastes that have accompanied this growth. He expects to add items with a more Mexican flair in addition to his staples, which he describes as “the best cuts of meat: choice or prime, all hand-rubbed.” Every piece of meat is “baptized,” (washed), seasoned, and marinated overnight, before being cooked for hours to achieve the best levels of tenderness and flavor. “This BBQ is real. That’s the best way I can describe it,” he smiles. Stop by sometime and enjoy a great meal in place that tells a piece of the story of Spring Branch.