Skip to content
Home » News » The Yellow Rose of Spring Branch: Houston’s First Whiskey Distillery is Right In the Neighborhood
Previous Next

The Yellow Rose of Spring Branch: Houston’s First Whiskey Distillery is Right In the Neighborhood 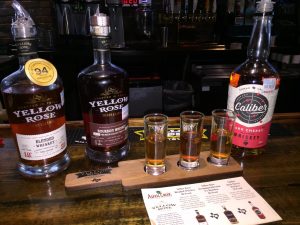 Did you know that Spring Branch is home to Houston’s first whiskey distillery? Yellow Rose Distilling, founded in 2010, and opened to the public in 2014, is the first legal distillery in Houston since the Prohibition era. While initially located downtown, it quickly outgrew its original space and moved to its current home in Spring Branch.

Yellow Rose is the passion project of partners Troy Smith (master distiller) and Ryan Baird who were ready for a career change, and were interested in the booming beer and spirits industry. They began their whiskey business by scouting locations, researching licenses and preparing for a product launch. They picked up partner Randy Whitaker along the way, and the trio has made successful selections ever since their first batch was bottled.

Their Houston-made whiskey was never designed to mimic Kentucky bourbon; they preferred to develop their own flavor profiles and finishes. This approach was a success, and Yellow Rose quickly became successful throughout the state, with their award-winning Outlaw Bourbon Whiskey, bottles of which can now be found all over, including in nearly 30 states and countries in Europe, and they produce seven types of spirits at an approachable price point.

The Outlaw Bourbon Whiskey, made from organic, Texas-grown corn, helped put the little distillery on the map. Most Kentucky-style bourbons don’t lean towards using a 100% corn mash, but as Texans, these three business partners tend to do things their own way. And while Yellow Rose can’t claim the honor of being the first Texas-made whiskey, they can claim the title for first rye.

You don’t have to be a whiskey know-it-all to enjoy the Yellow Rose facility. Novice whiskey drinkers and enthusiasts alike can both relax and learn something new when visiting the neighborhood distillery. In the tasting room, tourists can enjoy their favorite selections from the $10 tasting tour in larger pours. The custom-made cocktails are reason enough to hang out in the tasting room during visiting hours, with the impressive lounge greeting guests who ready themselves for bartender Houston Farris’ special recipes featuring Yellow Rose products. If you want to take home your favorite variety, you can purchase a handmade bottle or miniature cask at Yellow Rose’s distillery, but you’ll also find it available for sale at several Spec’s locations and better local whiskey bars, like Reserve 101 downtown.

Yellow Rose uses a labor-intensive process that involves small pot stills, and produces whiskeys in small batches. While the Houston start-up is small, in late 2017 the company announced the receipt of a sizable investment from Zamora Co., a long-time, family-owned spirits and wine company based out of Spain. In order to keep the quality and craftsmanship Yellow Rose is known for, the team will continue to produce using the successful methods they’ve relied on, but they are also preparing to need more space for larger order fulfillment, more production equipment and stills in the future. Here’s hoping this gem expands in Spring Branch!

Want to make a cocktail at home with your new favorite bottle of whiskey? Try the recipe for the Yellow Rose Tex Mex:

DIRECTIONS: In a pint glass, place sugar syrup. Squeeze and drop in the lemon wedges, mint leaves and limoncello. Muddle slightly. Add the bourbon and fill with ice. Shake and add more ice if needed. Top with club soda and stir. Garnish with a sprig of fresh mint and a lemon wedge on the rim. Serve with a long straw.