Throwing ‘Tantrums’ Is Good Business in the Spring Branch District 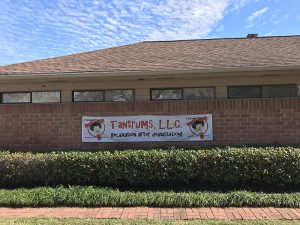 Ever have one of those days when you feel like you just want to smash something?

You might need to visit Tantrums, LLC, in the Spring Branch District, where for five, 10 or 15 minutes, depending on your needs and/or budget, you can smash everything in sight. And we mean everything — from plates to glasses to chairs to television sets to toys and stuffed animals.

Houston’s first premier rage room, now located at 1730 Elmview Dr, Houston, first opened at a location near Mitchelldale and Antoine in December 2015. When that space didn’t work out due to neighbors in too-close proximity, Tantrums owner Shawn Baker began looking for a stand-alone building. 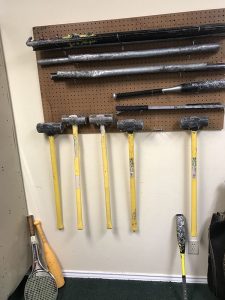 She chose her current location on Elmview, near Blalock and Neuens, because it was the most affordable and usable space in the Northwest Houston corridor, she said. Moving into the Spring Branch District also turned out to be great for business. Since the move 18 months ago, Baker said her business has tripled.

“It’s been wonderful,” she said. “My business skyrocketed.”

While it’s wonderful now, the idea for the business didn’t come at a wonderful time in Baker’s life. She had just been laid off from her job in the oil and gas industry in May 2015 and was feeling pretty angry with the situation, almost like she could break something. Her friend reminded her of an outing to a bar they had years before when some guys showed up with a pick-up truck full of junk. They pulled into an area behind the bar, pulled out the stuff and started smashing it all with baseball bats.

“It was a eureka moment,” Baker said.

People come for one of two reasons — to have fun or to get some therapy. Most people leave having experienced both. 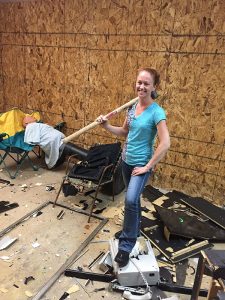 When Baker came up with the idea for the business, she expected some people would come needing to release some stress or anger, while others would just come with friends for fun. She didn’t anticipate a large part of her client base coming as part of professional therapy sessions.

In fact, therapy sessions at Tantrums have become so popular, Baker even set up an extra room with couches and chairs so that mental health professionals had a place to sit and talk with their clients before and after rage sessions.

“The ones that come for therapy show a noticeable change on their faces and their expression from when they arrive to when they are finished with their session,” Baker said. She said she has met people dealing with a loss in their life, rape, suicide, depression, anxiety, molestation, divorce and the list goes on.

“Those stories really stay with you,” Baker said.

“I truly enjoy helping people but never thought it would be this way. When they hug me after the session is over and thank me for being there, it’s very fulfilling. When they call me the next day and tell me I saved their life … Well, that is sometimes very overwhelming for me, personally. I truly feel this is my life’s calling.”

They also offer themed rooms. On a recent day, Tantrums hosted a group of 20 teachers who needed to de-stress. With advance notice, Baker can set up a room to look like a classroom. 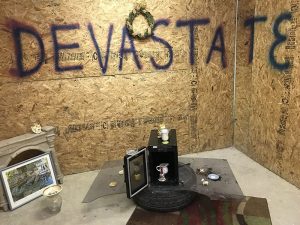 “When they’re done, they feel a sense of relief.”

Baker has four rooms and, unless someone requests a themed room, the rooms are set up randomly and no two are ever alike. They are stocked with whatever items Baker has on hand at the time. She has a relationship with resale shops who provide her with items they can’t sell, discarded electronics or things that are slightly damaged. Also, neighboring businesses have started bringing Baker items they don’t need or want. She will go out looking for particular items if someone requests a theme or experience.

Sometimes people are a little apprehensive about destroying a room that Baker has just set up for them.

“On occasion we encourage them that it’s ok to break all the stuff in the room. They feel like they shouldn’t because that’s how they were brought up and raised,” Baker said. 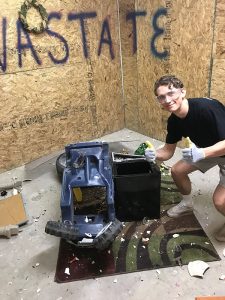 At Tantrums, Baker said, she provides a controlled environment where it is safe to go a little crazy. Crying, screaming, cussing is allowed. You won’t hurt anyone’s feelings, she said, and you won’t go to jail.

The best part? You don’t have to clean up the mess.

Tantrums has a 5-star rating on Facebook, Yelp, Google and BBB. In 2017, they were awarded the Award of Excellence Winner of Distinction by the Better Business Bureau.