The Spring Branch District gained a new beer garden and restaurant in July and, in case you haven’t had a chance to check it out, this weekend is shaping up to be the ideal time to stop by Lazy Oaks Beer Garden and grab a beer and some bites.

Or, maybe stop by again. Owner Chris McReavy said the Spring Branch community has been very welcoming to his new watering hole and dining spot. 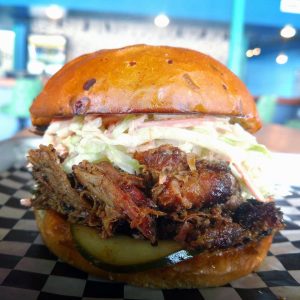 “The neighborhood seems to have really responded since we opened and we couldn’t be more pleased, not to mention all the great new friends we’ve made!”

Kids welcome until sunset, as their website says. Dogs welcome always. There is plenty of space to run around in the garden.

And, don’t worry. You won’t miss the game, as they have plenty of big screens.

The McReavys are also owners of Public House Heights on White Oak, which they opened in 2012. They are hospitality veterans who met in 2006 at The Raven Grill, where they were both working.

A full bar with 15 craft taps, Lazy Oaks also has a full-size kitchen and offers a menu of tasty food. Chef Grant Keaton created the menu. He’s owner of Cambio Culinary Concepts, former general manager for the Creek Group and was a sous chef for Benjy’s restaurants. 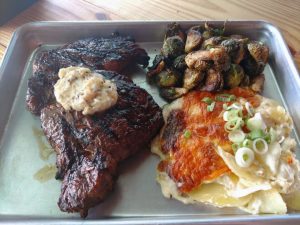 Menu items include a variety of specialty burgers, chicken sandwiches, salads and appetizers that feature treats like Brisket Bites (house-smoked brisket with neufchatel, jalapeño, bacon crack sauce and Carolina vinegar wrapped in bacon), chips and queso and three kinds of tacos, which you can make into a platter with beans and a beer for just an additional $4.

The wedge salad is a great starter or light meal, and the fried chicken sandwich is served on challah bread. Just want a little something to go with your beer? Try the house pretzel with beer cheese and house mustard.

Trivia nerds will love “Geeks Who Drink Trivia” on Wednesdays. Thursday is Steak Night at Lazy Oaks with $20 ribeyes or $18 NY strips starting at 6 p.m. Kids are welcome until 9 p.m. every night, after which it’s 21+ only.

Several local groups have added Lazy Oaks Beer Garden to their schedules for their fundraising efforts, including most recently the Tour De Branch bike tour through the neighborhood. 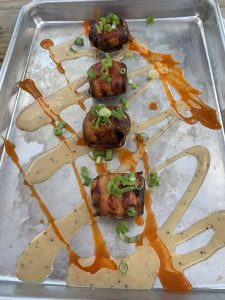 “We’re kid- and dog-friendly and have a nice, large fenced patio and lawn on the side under a ring of really nice, broad oak trees. There are quite a few restaurants and bars in Spring Branch but, honestly, nothing at all like this,” said McReavy.