A menu seasoned by the labor and love of five generations

A menu seasoned by the labor and love of five generations 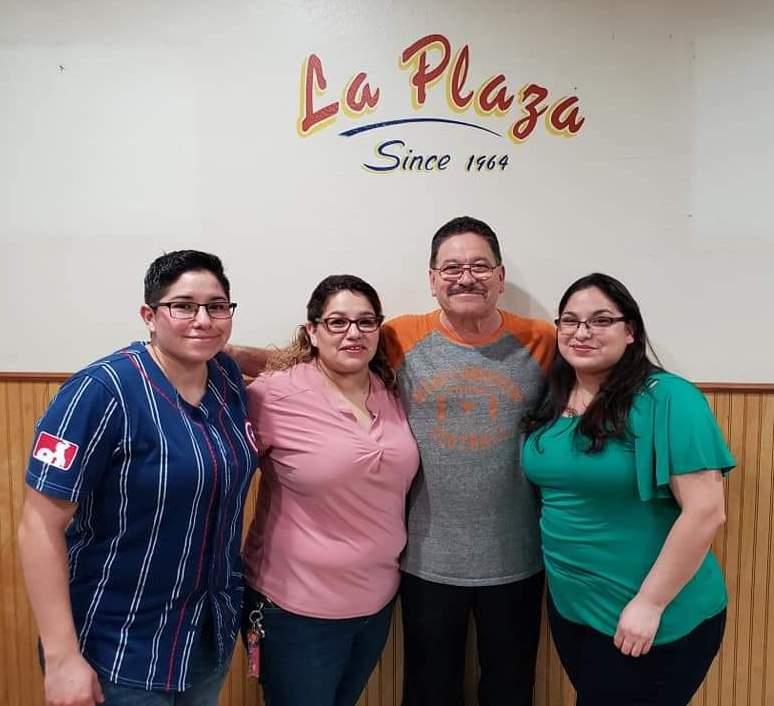 “Val” Villareal with daughters, from left, Elizabeth, Maria and Michelle.

There aren’t too many restaurants in the Houston area that can boast work by five generations of family members.

But Valdemar “Val” Villareal’s La Plaza Restaurant, at 1803 Bingle Road in the heart of Spring Branch, is such a wonder.

Valdemar’s father Roberto bought the restaurant in the 1960’s from the original owner, who designed it as a diner with strictly diner fare on the menu. Valdemar’s grandparents worked at the restaurant as well in the early days.

Having remained in the same spot, the restaurant retains the same authentic classic diner design, complete with a counter and stools. University of Texas memorabilia is on display because Valdemar is a huge fan. The sights present a homey feel that corresponds well to their home-cooked style of foods.

Valdemar took over the business in 1990 and now runs the restaurant with the help of his daughter Elizabeth Villareal — and even his 18-year-old granddaughter Kayla Ramos occasionally helps out.

Way back in the beginning, while serving diner food, customers repeatedly asked Roberto for Mexican food as an addition to the American foods on the menu. The emphasis shifted and is now on Tex-Mex comfort cuisine, mixed with a bit of traditional American diner food.

“We have a close knit community here in Spring Branch, and we have a lot of loyal, regular, long-time customers who tell us what they want on our menu,” Valdemar said. “We do our best to accommodate, and even name dishes after long-time customers.”

Valdemar is especially grateful for the loyal customers who have seen him through the particularly difficult era of the pandemic. 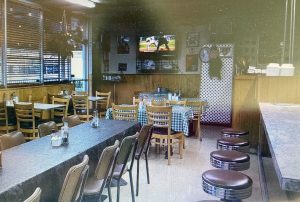 “Our business was down to about 70 percent, but we were able to survive, and now it looks like we are back on the upswing,” he said.

Most of Valdemar’s business is breakfast — large and tasty breakfasts, Tex-Mex style and American. Some combine the two styles.

“We named one of our most popular breakfast dishes for a long time customer named Paul who had been coming here for 40 years, and we call it ‘Paul’s favorite’,” he explained. “It is a breakfast of three eggs, potatoes and refried beans, four slices of bacon, and toast or a tortilla. Paul (who has since died) was very happy about us naming it for him.”

Another breakfast customer favorite is the “machacado,” a northern Mexican dish that which features an omelet of eggs, onions, peppers, and dried beef.

There are waffles on the menu, too, and for lunch and dinner, burgers and other favorites.

“We prepare our burgers from scratch, using upgraded beef, made fresh, and we add our own spices,” Valdemar said. “It makes a tasty burger and the buns are great, too, and come from a bakery in Stafford.” 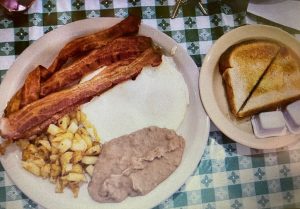 Another palate-tempting favorite of customers are the enchiladas with cheese, beef, or chicken. The secret to their goodness is in the home-made chili gravy that his mother, Guadalupe Villareal, created way back in the 1960’s.

“That’s the real reason our enchiladas are requested and ordered so much, it is a chili gravy that is so good,” he said.

Valdemar prides himself on being able to whip up most anything his customers want, on or off the menus. And the place is open seven days a week.

He sees a post-pandemic comeback happening soon in the restaurant business — and it’s hard to question such an insight based on five generations of experience.

In consideration of measures aimed at stopping the spread of COVID-19, staffing of Spring Branch District offices is limited at least through April 30, 2021 while staff works remotely on a full-time basis. Staff may be contacted as follows: