An officer becomes a super-hero by tracking down stolen bikes 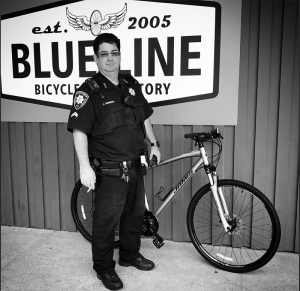 He is officially known as Harris County Precinct One Constable’s Corporal Joe Bowden, but those in Greater Houston’s cycling world know him by other names, as a query to the Facebook group Stolen Bike Search Houston revealed…

“A legend in these parts,” said cyclist Rick Mosling.

“My hero” and “the only cop I trust” added two more.

Several others mentioned how Bowden recovers stolen bikes and returns them to their owners.

“Got me my bike back in 2 days, I’d love to see what he can do for my dating life!” added Collins Akharoh.

Modest and possessed of a wry sense of humor, Bowden deflects the praise showered upon him.  A deputy constable since 2013, Bowden says he pretty much fell into solving bike theft cases in Precinct One, a beat that includes Spring Branch, Acres Homes, Montrose, Midtown, the Heights, Garden Oaks / Oak Forest, Inwood, part of Fifth Ward, and downtown.

“I wouldn’t say it’s a specialty of mine, it’s just there’s that many stolen in Houston,” Bowden says. “If you look on Nextdoor, Facebook, sites like that, or police reports, there’s always a bicycle involved. It didn’t take long to see that. And it has led me to (detecting) other crimes as well.”

While statisticians and other wonks regard most instances of bicycle theft as more or less petty crimes, it often amounts to something far greater than a mere nuisance to victims. If it happens in public, a bike owner is stuck without a ride home, or in some cases, for those whose bikes are their sole means of transportation, a ride anywhere at all. Cyclists are often sentimentally attached to their rides, and on the practical side, breaking one into optimal riding status takes time, effort and money. In every case, there’s an element of personal violation to losing your bike to thieves; the pain transcends the replacement cost.

National stolen bike tracking site 529 Garage estimates some 2 million riders are affected each year and that a bike is stolen every 30 seconds in America. One quarter of riders cycle less after a theft and 7 percent quit altogether, according to their stats. Such dismal stats bode ill for cities that want to tout themselves as cycling friendly and advancing toward a greener future of fewer cars are on the roads.

And when crimes like bike theft — or theft of items from locked cars by thieves who smash windows — become rampant in a city, they become quality of life issues. It doesn’t matter how lovely a city’s scenery, how vibrant its culture and nightlife is if you can’t enjoy it without running a high risk of wasting a Saturday down at the auto glass repair shop or losing your beloved bike to criminals.

“Anywhere between 30 and 50 per cent of your cycling friends will have a bike theft story,” former Microsoft tech guru turned cycling advocate J Allard told Canada’s Financial Post last year. “I hated that it became normalized in the cycling culture, but more so, that theft is a meaningful deterrent from getting new riders to adopt the mode. We need less congestion. We need less obesity. We need better mental health. We need more moments to slow down. We need sparks of joy from our childhood.”

A few years back Allard scoured the United States in search of a single law enforcement official whose sole job was combating bike theft and found exactly zero. And Houston is no exception, but it has the next best thing: Corporal Bowden, the Bike Whisperer.

Catching these thieves and fences does not take a Sherlock Holmes. An Inspector Javert with a just cause will do — and that describes Bowden to a tee. He is on a crusade, and is willing to put in the work on the streets and on the internet to track down stolen two-wheelers where the thieves often offer bikes for sale.

While much of Bowden’s work in this area consists of recovering bikes one at a time or in small batches, occasionally he hits a motherlode, an equivalent in the cycling world to those multi-ton drug busts you read about coming from places like the Port of Houston or border checkpoints on the highways. Most notably, there was the Truxillo Bust of 2018, when Bowden’s dogged police work led to a raid on a Midtown home.

Cycling advocate Jim Honey happened upon the scene: “It was just these huge bust! These trailers full of bikes and more bikes coming out! And it was Bowden!”

Two flatbed tow trucks were required to haul the bikes off to evidence — some 64 of them with an estimated value of $20,000. 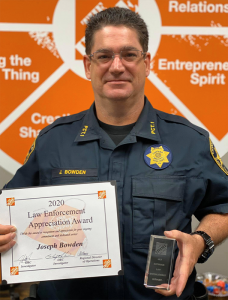 “It was the payoff of some very diligent police work by Joe Bowden,” Honey says. (Cyclists need to do their part too — always take note of your bike’s serial number. Keep several copies of it, in your paper files, on your computers, so you can prove what’s yours really is yours when and if the Bike Whisperer strikes on your behalf).

Honey says the Bowden approach hasn’t always been the case with other local law enforcement agencies, specifically the Houston Police Department. He cited the case of a friend — Houston cycling legend Joy Boone, of Daniel Boone Cycles and the Houston Bicycle Museum — who found two of her stolen bikes listed for sale on the Internet a few years ago. On her behalf, Honey took those leads to HPD. “And I couldn’t get any response,” Honey said. “Today it might be different, but back then I couldn’t get a response.”

Bowden, on the other hand, often tracks down stolen bikes for sale online, and he has dozens and dozens of Houstonians eternally grateful to him for that fact.

“People tell me all the time, ‘I never thought I’d see my bike again,’” he says.

And it’s that kind of reaction that has implications far beyond the monetary value of the bike. It affects the way citizens look on their very lives in the big city.

“In a world where policing has moved further and further away from community policing, and further into hiding in underpasses looking for expired tags, seat belts, or that guy descending a ramp overpass 10 mph over the limit…Joe, RESTORES MY FAITH IN HUMANITY,” thundered east Spring Branch resident Andrea Piro in an e-mail.

She said she chooses to live in Precinct One because it is policed by Bowden and the rest of the force supervised by Constable Alan Rosen.

“Rosen’s entire team is incredible,” she said, adding that, “If you’ve ever been robbed you [usually] can kiss that stuff goodbye. Joe gives hope. He’s easy to contact, and he’s consistently producing in a way that makes everyone feel like community policing is back.”