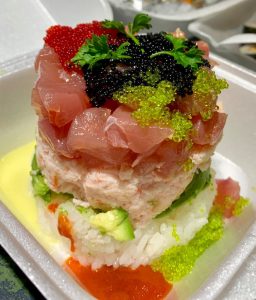 Self-taught chef and EurAsia Fusion owner Sushi Jorge Liao was a long way from his native Panama years ago when his Chinese-born wife persuaded him to give sushi a try for the first time.

“We were in China,” he remembers. “She told me it was raw fish and offered me some salmon,” And I told her there was no way I was going to eat raw fish. She told me not to worry, that it was not fishy-tasting so I tried it. And it wasn’t. It tastes sweet to me.”

And that was the first step towards Eurasia Fusion Sushi. Tucked away in the same strip mall that houses Fratelli’s — the one with the bell tower at the corner of Wirt and Westview — EurAsia Fusion Sushi’s name is somewhat limited in its description of the restaurant’s fare. Yes there is sushi, and yes, they take a fusion approach, but the range of influences extend far beyond Europe and Asia, and the menu extends far beyond sushi, nagiri and sashimi and other Japanese dishes you might expect — soups (udon, ramen, miso), seafood-forward salads, and entrees like bento boxes, tempura, teriyaki, and yaki soba. You can also get Euro-American standards like rack of lamb as well as a Kobe burger that draws raves.

They take a family- and pet-friendly approach — there’s a kids menu with the usual suspects as well as Japanese cuisine starter kit items (tempura and salmon or chicken teriyaki) and a patio for those who bring their dogs. 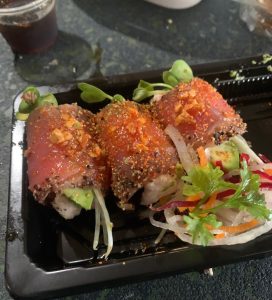 The Eurasia Ahi Tower proved its mettle the first time around and so made the second order: it’s an amazing little mound of goodness comprised of tri-colored tobikos (flying fish roe) sprinkled atop a layer of diced tuna atop another of a creamy crab concoction atop avocado atop sushi rice. Eating it presents something of a logistical challenge best addressed by consuming it alone; manners tend to go out the window in cases of dishes so delicious yet puzzling to attack.

Eurasia offers delivery, pick-up and dine-in. Liao is taking COVID-19 very seriously, so reservations are highly recommended. If you happen to be in the neighborhood and want to treat yourself, you can try walking in, he says, but just to be sure of getting a table he recommends reservations.

How Houston a restaurant. Think of its global approach and ownership — an ethnic Chinese of Panamanian background learns to love Japanese food in China and comes to Houston and opens a sushi restaurant with an international spin. Such stories a little more common in Chinatown; Spring Branch is lucky this one is in the heart of the area.