Fast and casual Thai outpost is a real bang

It has never occurred to me to think, “What this neighborhood really needs is an inexpensive fast casual Thai restaurant, ideally with a drive-thru,” but now that such exists, that nonexistent longing has been replaced with another thought.

Namely —  “I don’t know how people get by without fast casual Thai restaurants with drive-thrus.”

So I am thinking at home, while dining on chicken green curry, chicken pad Thai and Thai fried rice from a real-life fast casual Thai restaurant with a drive-thru right there on Long Point, in what was most recently Taqueria El Chilango and long before that, a Jack In The Box. 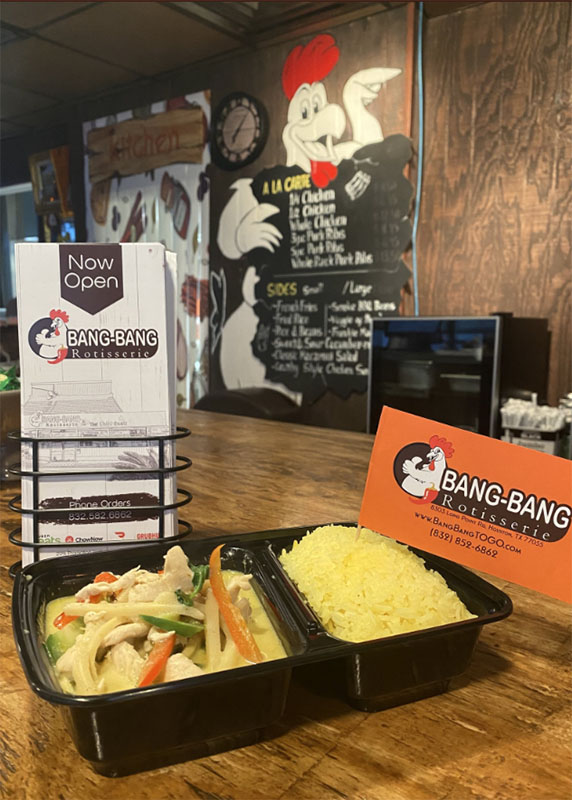 Bang Bang seems almost as if it were designed with the COVID-era in mind. There are only five or six tables along a side wall, on the way to the restrooms. With its walk-up counter and drive-thru window, it was plainly designed for diners on the go. Given that, and the small kitchen, the menu doesn’t sprawl over several pages as you might find at a more formal establishment, such as venerable Vieng Thai a mile or so east. Here there are only six different rice boxes and four wok dishes, along with various permutations on their rotisserie chicken and rib main dish options.

As someone known to pompously advise all comers on how to order in certain restaurants, but also someone capable of admitting to making mistakes on occasion, I’ll freely admit that I ordered poorly at Bang Bang. Not that I didn’t enjoy my green curry chicken (warm, lemongrass-tanged with just the right spice kick) and my pad thai immensely. In fact, too much so — I am counting calories with a phone app and rarely disobey my allotment, but those two dishes made a mockery of my discipline as I ate all of both orders. (Which in the case of the pad thai was kind of a lot — it’s a large serving. I resolved to walk it off later that evening.)

And it was while I was eating that I realized that I did not obey one of my own dining rules — when I restaurant tells you it’s good at something, you should try it and see for itself. And because Bang Bang is a rotisserie, I realized, perhaps I should have sampled their rotisserie chicken or ribs. (My excuse — I’ve never been to a Thai rotisserie. It just did not compute with me — when I think Thai, I think curries, glass noodle salads, lime/spicy coconut and chicken soups, and so on — not roasted yardbird and ribs.)

And going by the reviews, even as much as I enjoyed the curry and pad thai, I missed out, and not just on the meat, but Bang Bang’s creative sides and sauces as well.

Well, dang. And there were similar choruses of praise for Bang Bang’s fusion spin on macaroni (imagine a pad Thai albeit with short curlicued noodles instead of long spaghetti style) and more for the sauces that accompany the chicken and ribs. While their spicy lime sauce was the favorite, others such as sweet and sour plum, chipotle mayo, and the house Bang Bang sauce all had their partisans too.

Oh well. Now I know what to try next time. And there will be one, but here’s wishing the Bang Bang you experience is that reputedly phenomenal roasted chicken and not the sound of Maxwell’s silver hammer, as described in a Beatles song, knocking what good sense you possess out of your head.