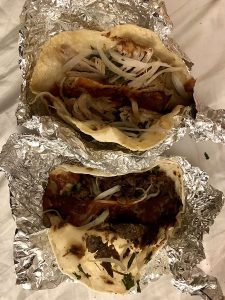 Housed in what was once, about a decade ago, Old Smokey’s BBQ, Taco 7 is an offshoot of another restaurant down in the Quail Valley section of Missouri City that temporarily shares the same name now and another in Stafford with which it once shared a name — namely Tornado Burger. It was under that name that this restaurant opened, back before it streamlined its menu (out went burgers, gyros, and cheesesteaks) and its hours — no longer is dinner served.

Much of that is set to change because Spring Branch’s Tornado Taco has undergone a name change, at least if the new sign in the parking lot has anything to say about it: though a formal announcement has yet to be made, Tornado is set to be reborn as Taco 7 and apparently, according to the same marquee, burgers will once more be on offer.

Meanwhile, cars still coil around the building every morning, each full of Houstonians eager to get their hands on some of the best breakfast tacos in the city — and most certainly near the top in Spring Branch:  In a recent Facebook poll answering the question of who had the best breakfast tacos in Spring Branch, Tornado was the consensus pick.  (Diners can also phone in orders for quick pick-up inside for takeaway.)

Just one bite of their bacon and egg breakfast taco shows why: fluffy scrambled eggs, add-on queso blanco, and crispy-chewy smoky bacon combine with their red or green salsa inside a nice warm tortilla. The best part of waking up — a Tornado breakfast taco in your hand. And their lunch tacos aren’t bad either — both the carnitas and barbacoa were well above average, and average in Houston is mighty good. They also offer fried fish and spicy tofu for the vegan taco fan. Tortas are also available, as, of course, are burritos, both of the breakfast and lunch/dinner variety, which includes the Traditionalist, Cowboy (steak), Californian (chicken), Sonoran (carnitas), and Mexican (barbacoa). And also the Tofutarian, which comes with mushrooms, cabbage, and pico along with the tofu. (Make sure you specify no cheese if you are vegan; vegetarians have a choice of this one or a bean and cheese burrito.)

It’s odd how few independent local taquerias have drive-thrus — between taco trucks and sit-down restaurants, and chains like Taco Cabana and Taco Bell (which I hesitate to even call a taqueria or even class as Mexican food), this niche is woefully underrepresented. But no matter whether you pick them up at the drive-thru or at the counter, Tornado Taco will not disappoint, either under that name or Taco 7.