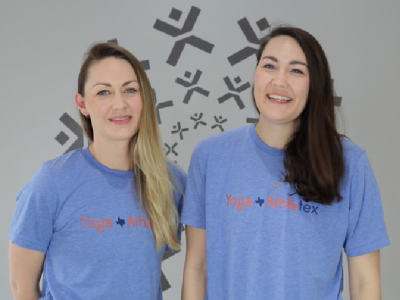 Sisters, athletes and native Houstonians Patricia Bomar and Kalynn Evans grew up playing competitive sports, from volleyball, softball and basketball to badminton, handball and flag football. They even played hockey on rollerblades.

“Our mother— a four-time All-American at the University of Houston for volleyball —  instilled in us at a young age that to get anywhere you have to hustle,” said Bomar.

They had that competitive edge, but it wasn’t until later in life that the sisters realized what was missing throughout their entire athletic careers: proper, sport-specific training and recovery.

It was a painful road to that realization. Now the sisters, who are also best friends, are on a mission to create a safe space for athletes to train properly and get restored.

They opened Yoga Athletex, or YAX, an all-encompassing training facility for female athletes at 10510 Westview Dr. in 2017. More recently, they launched YAX Online so athletes all over the world can, as the Yoga Athletex tag line states: “PLAY + WORK + RESTORE.”

“Post college and after many injuries, we were encouraged by doctors to try yoga. We were hesitant at first, being super competitive athletes, but we tried it anyway and are so thankful we did,” Bomar said. “After a few months of practicing yoga, our minds were cleared, we could breathe again, and we could stand for over an hour without wanting to cry, because the pain was gone.”

Bomar said she and her sister were never taught the importance of rest and “breathwork.”

“We were part of training programs that were similar to those of the football teams and a dated body-building program. We needed to be training differently and specific to our sport,” she said. 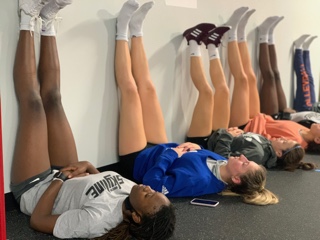 Through their Spring Branch District yoga business, the sisters partner with athletes, parents, coaches and many sports-related organizations to offer in-person and on-demand/online sport-specific recovery protocols through yoga for athletes, performance breath instruction, meditation and more.

Bomar said Yoga Athletex trains the top ten teams at the top-rated Houston Skyline Volleyball. They also train a professional volleyball athlete and several retired collegiate athletes, and have  trained and continue to train some club level and professional soccer players from TTI Soccer and the Houston Dash.

“We’ve also trained NFL (football) and MLB (baseball) athletes in the past,” she said.

The sisters are from the Heights area but chose the Spring Branch District for their business because of its access to more sport organizations.

“It’s a great location to be able to market to inner-city Houston but also suburban schools and organizations,” Bomar said.

YAX Online is also just a click away: yaxonline.com.

“Any athlete in the world can get on their yoga mat with us,” Bomar said. “We tell you what type of yoga to do and when to incorporate it into your training regimen.”