BBQ scene in Spring Branch is smokin’ with many styles

BBQ scene in Spring Branch is smokin’ with many styles

It’s summer in Houston, when families, friends and neighbors gather for backyard barbecues featuring hot dogs and burgers sizzling on the grill, cold watermelon slices and kids jumping in the pool, soaking up the Texas sun.

That’s barbecue, the event. But barbecue, the cuisine, comes in many different forms and at many locations in the Spring Branch Management District, and it’s year-round.

There’s what many consider Texas barbecue, or BBQ or Bar-B-Que, which can be found at two longtime Spring Branch establishments — Virgie’s and Aunt Pookies — and a newcomer to the area, Feges.

Virgie’s Bar-B-Que, 5535 Gessner Drive, was originally Virgie’s Place, opened in 1965 by Jessie and Virgie Handsborough. It was a neighborhood spot for great burgers and a hangout for teens. In 1975, the building was converted into a community grocery store, Handsborough Grocery, until 1998.

“You’re in for a treat,” a woman said as she waited for her to-go order for lunch on a recent afternoon. The intoxicating smells of the meats smoking in the back fed the excitement of the customers waiting for their ribs, brisket, sausage or chicken served on paper plates with homestyle sides.

On its website, Virgie’s says a high percentage of its business is from repeat customers and referrals. The claim is evident if you ask anyone waiting in line what they like to order; they go down the long list of items they have tried over and over again.

A man walked in that Saturday and looked around, taking in the interior of the restaurant, decorated with old photos and Western decor.

The woman behind the counter asked: “First time here?” It wasn’t his first time. “First time in a while,” the man said, adding that he had been hankering to come back. 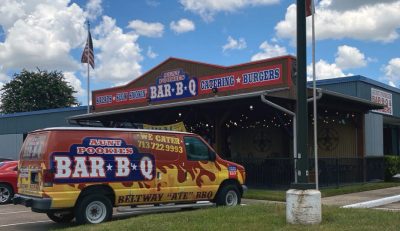 “From BBQ to burgers to Philly cheese steaks and beyond, for over 40 years now Aunt Pookies has been serving the good people of Houston.” the restaurant’s website proclaims. Well, it’s been over 50 but who’s counting?

Aunt Pookies has been serving since 1968 and recently opened on Saturdays. But it’s clear that nearby weekday office workers frequent this spacious establishment for breakfast and lunch. The menu is extensive.

“Our office is right across the street and we eat lunch here all of the time. They are always friendly and the food is always great. I particularly like their potatoes with brisket,” said one reviewer on Yelp. “Just glad this place is so close to work!”

Speaking of close to work, Erin Smith and her husband Patrick Feges first opened Feges BBQ in March 2018 at Greenway Plaza, where — like Aunt Pookies — they cater to the lunch crowd from nearby offices.

But, with Smith’s fine-dining experience and Feges’ barbecue expertise, their approach combining traditional flavors with modern interpretations of classics brought in diners from all over. They even posted a video on social media explaining where to park at Greenway Plaza for those who do not work there. 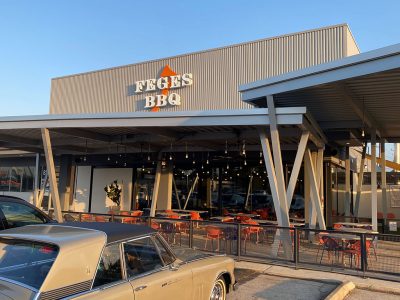 Located in the now bustling Spring Branch Village, Feges BBQ, 8217 Long Point Rd., offers lunch and dinner with indoor seating, an outdoor dining area and a children’s play area. Order at the counter and the food is delivered to your table. On a recent visit, video screens around the venue showed a TV episode of The Lone Ranger.

Spring Branch offers a variety of international cuisines, and Feges embraces many of them in its offerings. The Cracklin’ Nachos feature fried pork skins, or chicharrones, instead of tortilla chips, and the greens are “Korean-braised.”

Before opening Feges BBQ, Smith worked as a sommelier (and has a long list of accomplishments and experiences in the culinary world), so “Wine Wednesdays” at Feges in Spring Branch are thoughtful and informative events with half-off bottles and glasses of wine that pair nicely, of course, with barbecue fare.

Known in Houston’s culinary community as the “Whole Hog Guy,” Feges is a self-taught pitmaster — and Purple Heart recipient because of injuries sustained during military service in Iraq. It was during his recovery that he was hit with the barbecue bug.

In 2012, Patrick purchased a large smoking rig and launched Feges BBQ, catering events and staging pop-ups with non-traditional smoked cuts. In 2019, Feges BBQ made Texas Monthly just like Virgie’s did a few years before. It was named one of the “25 Best New Barbecue Joints in Texas.”

Now the newest in the Spring Branch District, Feges BBQ only needs to look to the 50+ years that Virgie’s and Aunt Pookies each have been in business to know they should expect to be smoking meat here for many years to come.

But with so many international influences, it’s no wonder that Spring Branch BBQ reaches well beyond the Texas style.

At Juarez Mexican and Tortillerria Matehula, just to name a couple of Mexican restaurants in the District, the barbacoa is juicy and seasoned with flavorful chilies and spices.

At Spring Branch’s Argentinian restaurant, Pampa Grill, parrillada is king, with what seems like every cut of the cow served on a hibachi-style grill delivered to your table.